Coral reefs are incredible ecosystems home to hundreds of thousands of species, but unfortunately, they have been absolutely devastated in recent decades. Warming ocean temperatures, pollution, ocean acidification, overfishing, the list goes on, and we are now faced with the very real prospect that we could lose an entire ecosystem.

Half of the worlds coral reefs have disappeared over the last 30 years, a fact which has become a rallying cry to researchers. Today I am going to explore how some are utilising genetic engineering to tip the scales.

First up, what even is genetic engineering?

Genetic engineering is “the deliberate modification of the characteristics of an organism by manipulating its genetic material”. This can be adding, removing or altering the material, or even splicing another organisms’ DNA with the organism you are modifying. Only a few years ago this tinkering with DNA was a long laborious task, today we can edit a gene with a new technology called CRISPR-Cas9 with relative ease.

The technology CRISPR was adapted from a bacterial genome-editing system that acts as an immune memory and attack system. When a virus invaded the bacterium, it would take snippets of their DNA (named CRISPR arrays) and stored these. The bacteria can then use them to recognise a future attack and produce RNA segments from their stolen DNA to attack the virus. 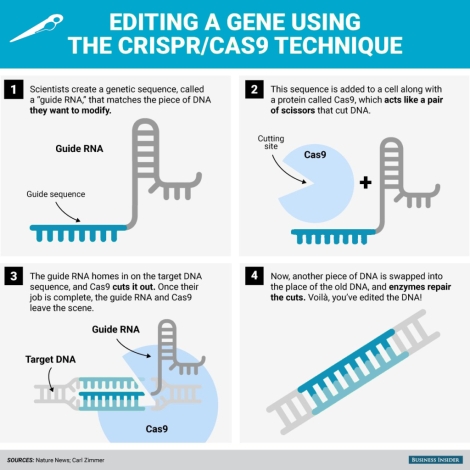 So, how does this relate to coral?

CRISPR opens countless doors, from enhancing agriculture to new ways of treating human diseases. For example, scientists have attempted to cure HIV by cutting out viral genes and have succeeded with T cells in the lab.

But a more unusual application that may not come to mind when generally thinking about CRISPR – how CRISPR can be used to help our corals. There are actually a few angles that can be taken when looking at this application, and we will begin with: 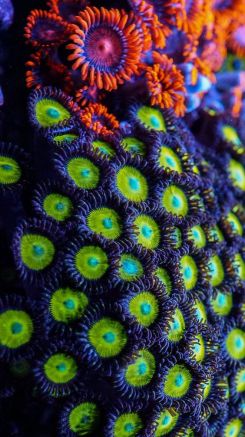 How beautiful are these zoanthids?!

Researchers at Stanford University are looking into using the CRISPR system to get a better understanding of natural defences coral already has. They are also looking to classify what genes could be important in the corals’ natural evolution pathway to find an effective way to survive the changes they face. Dr Phillip Cleve, geneticist and lead author also explained that this research could be used to predict what could happen in the future.

For genetic engineering to affect the whole organism, genetic engineering must be done at a critical stage before the cells have multiplied and start specialising. Coral only breed one or two times in an entire year depending on the type of coral, during which they release their sperm or eggs into the big wide ocean to mix and fertilise those around them. Before the coral can settle down and become home-owners this is when the editing needs to take place.

One of the genes being investigated is responsible for regulating how a new coral settles and grows in a reef, but there are countless genes that can be discovered. Another option is potentially knocking out genes that are involved in kick-starting the bleaching response, however, we do not know what would happen if this response is over-ridden.

The saying “one gene one trait” is incredibly uncommon in the real world. Complex responses are likely to be several genes that interact, so before we can manipulate these systems we need to learn more about them, which is ideal as that is what Cleves has set out to do.

The second angle of attack – Algae 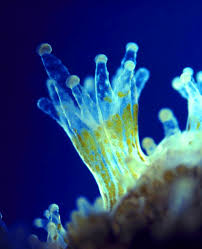 Zooxanthellae living within the polyps’ cells

It is not only the coral itself that is getting the GM treatment. Their survival depends heavily on the single-celled organisms called algae that live within their skeleton. Juvenile coral polyps ingest the algae (also known as Symbiodinium or zooxanthellae) and move them into their outer cells. Here the coral can reap up to 90% of its nutrients it needs from the photosynthetic reaction the algae produce, and in exchange, it offers the algae a safe place to thrive.

Rising water temperatures put the algae under a lot of stress by interfering with its photosynthetic reactions which causes them to release oxidants. These oxidants begin to assault the coral, which leaves the coral little choice but to expel the algae, causing bleaching. Algae can be reintroduced to the coral which reverses the bleaching process, but if they are not the coral will starve to death.

Madeleine van Oppen of the Australian Institute of Marine Science and Ruth Gates of the University of Hawaii are trying to breed heat-tolerant corals/corals that can adapt to rising temperatures. Genes of interest in algae could include the antiviral response, and antioxidant activity/thermal tolerance genes. The last is especially important as they could have a huge role in categorising the corals bleaching susceptibility, such as the iron-type superoxide dismutase genes. These are believed to minimise the oxidative damage and leakage of reactive oxygen species from an algae variant, however, some have been found to not express this gene. Theoretically, this gene could be inserted into the algae that do not possess it to make them more tolerant to higher temperatures.

As previously mentioned, the organism living on and inside the coral are vitally important. Research has shown that, quite like humans and our microbiome, there are a number of different bacteria that live in the coral mucus coating, gastric cavity and even in its skeleton.  There are a few options when it comes to altering the microbiome, you can: alter the ratio of different species, add new species or variants, or mutate the genes in the existing community.

Van Oppen suspects that the microbiome could play a key role in neutralising the oxidants produced when bleaching is triggered which could prevent the coral from evicting the zooxanthellae and therefore prevent bleaching. The microbiome can also contribute to the defence of the coral by secreting antimicrobial peptides, so there are a lot of different ways the microbiome affects the health and ability of the coral to adapt.

Epigenetics means “above genetics” and are tags that don’t permanently change the DNA code itself but add little flags to it. It has been found that, like regular plants, some corals acclimatise to warmer temperatures when gradually introduced to them. It has also been found that if they survived a previous heat wave/bleaching event they seem to be more resistant when temperatures increase again.

While these pieces of research are incredible to highlight ways to support the coral evolution and growth, it is also important to not lose momentum and drive when it comes to changing how we treat our planet. It’s likely that the battle to save the reefs will be decided in the next decade, I hope these pieces of research can inspire more funding, further research and tip the balance in the reefs favour.

2 thoughts on “How CRISPR can save our coral reefs”

Pathologically curious and an eternal philomath

Curious about kelp?
New article on @workingabroadprojects blog page!
Some interesting research about the impact of solar panel shading on flower abundance and pollinator activity 🪲